–I am totally healthy. PYSCH! I’m kind of dying again. I mean, not really, and I’m actually way less dying now than I have been at any point in September. That whole damn month was really a wash because I was incapacitated with illness the whole time. On Saturday I woke up with the worst migraine I’d had in seven years, and it very abruptly changed our plans and affected the course of my family’s entire week. It was heavily painful in the sinus region and I had a fever so I’m pretty sure it was sort of a last hurrah for whatever virus I’d been tangling with all month. My voice still isn’t back to normal and I can’t make more than a few hoarse squeaks when I try to sing. It’s been bad over here. I’m not sure why it hit me so hard or if having an auto-immune disease like Crohn’s played any part in the severity or duration of my illness. All I know is that it’s October now, which is my birth month, so I expect the Universe to send some good health my way. Or at least basic functionality. I’ll take some basic functionality. Of all my various maladies that my ill health causes me to suffer, I fear migraines the most. When I get them they can last up to fifteen days and plague me even in sleep. I’d rather have a triple dose of Crohn’s nastiness than migraines. It is the highest on the pain scale and puts me lowest on the functioning scale. I’d take a migraine over labor, but that’s about it.

— Homework has been somewhat of a struggle for us but I’ve been trying some different things and it’s been getting easier. The other night we were working on it and Isobel kept shouting I FEEL CRAPPY! On further investigation what she meant was ‘crabby,’ not ‘crappy,’ which I find pretty hilarious.

— While I was sick I put on Mythbusters for Isobel and I to watch and she’s hooked. She doesn’t always understand what they are doing, but she loves watching them make ‘inventions.’ She’s been making her own inventions for awhile now, so it’s perfect.

— My lovely friend Emily was kind enough to send us some cloth napkins, both table and kid-lunch size, and an adorable bandana bib for Elias. That was so sweet, thank you!

— Elias makes these little dinosaur grunts and roars and it’s just about the cutest thing ever. It’s also pretty surprising how loud they can be. He just turned six months, and I can hardly believe it.

— We have been collecting leaves and other ‘signs of fall’ each day on our way to and from school. We’ve even had some sprinkles of rain lately. True to my Caucasian, heteronormative feminine gender expression, I love fall.

— A really awesome thing that happened last week is I got to see my internet soulmate Dolly compete on Jeopardy! It was surreal and fantastic and amazing and I am blown away by her guts. Just to get up there is amazing. Sometimes I can’t even get my shit together enough to go to the bank, and she exchanged banter with Alex Trebek. Who called her funny. OMG. She totally owned the literary category, natch.

— Isobel created her first portmanteau and of course I’m proud. I’m even more proud that it involved the word ‘poop.’ Her creation combined the words “republic” and “poop” to invent “rePOOPlic.” Regrettably, it was during the Pledge of Allegiance.

—I am trying out ello! Let’s be friends.

Follow Friday: Flowers by the Seaside. Photos of the coast and this week’s most hilarious tweets.

Little Big Kitchen: Adventures in Pickling. So far no one has died.

Adding monsters to thrift store paintings. This has been around forever in viral internet terms, and I’ve featured it on the blog before, but the season is right and it’s been awhile so I figured I’d link to it again. Every once in a while someone emails this link to me because it made them think of me, which is a mighty fine compliment indeed. Thanks, April.

Are you, like me, a crazy cat lady? This is relevant to your interests. Via woman who gets me, jillgengler

What is your problem with antenna calculators?? Via nacho soulmate libsnyds

Indian spacecraft reaches Mars for less than it cost to make “Gravity.” How about more space travel, less movies? Gravity was a great film but I think there are more important things we can do with our money than, say, another cinematic go-around with Michael Bay. Via adamgurri

My kid bought a giant stuffed penguin at a yard sale. It’s my new favorite thing. Via theanalogdivide

This guy bench-pressing a goose really has his shit together. We could all learn a lot from this one.

The Transformers/TARDIS mashup you didn’t know you were waiting for. Optimus Time, bitches! Via oodja

Do you have ADHD? Not the ideal way to teach your target audience. Via Tylere_B

“Nobody wants to be kissed like this. Nobody.” This made me sortle. I have had these exact thoughts. Via mallelis

Team Harpy call for witnesses. Two women are being sued in a one million dollar lawsuit for calling out harassment. This has to stop.

Child Loss And Social Media. When the unthinkable happens sometimes people don’t know what to say. Sometimes things that are said can be unintentionally painful. We are connected to so many people via social media that coming across grief and loss is inevitable. This post should be required reading. Via Diana

Sophie’s Squash. Vintage-purveyor and internet friend Farren kindly sent me this link because it reminded her of Isobel and Pumpkiny.

As You Wish. Cary Elwes wrote a novel about the making of The Princess Bride!

Do not, I repeat, DO NOT put a Mac Book pro in your pocket! Ha! I like the 6+ but I have tiny little mitts and need to be able to use my phone one-handed because the other is usually full of baby or a Pikachu collection.

Owning a home in California is becoming less accessible to this generation. This makes my stomach hurt. Via Jeopardy-contestant and all around righteous babe, loather.

Watch Beck’s son dance on stage with his dad. I just… I can’t… I love it so. There are no words. No words.

This is the best video about girly shit to do in the autumn. Via role model, ImAmandaNelson

Grandparents Keep Accidentally Tagging Grandmaster Flash in Facebook Posts. The is one of the best things that has ever happened on Facebook, along with the cut-and-paste recipe in the middle of an Obama rant, and my Mom’s first Facebook post being just my name. Via superwoman incarnate, my friend Ellen.

Recipe: Autumn Risotto with Pumpkin or Butternut Squash. Oh god, this is my fave.

Thrifted Maternity Closet: Week 18. I love that Isobel poses with me.

Isobel’s Thrifted Closet: Winter Dress. We wore the hell out of that dress.

Follow Friday: Tinkerbell. Hilarious tweets and photos of one of the best cats who ever lived.

Let’s talk about the sad parts. Meet my experience with depression, anxiety and panic disorder. 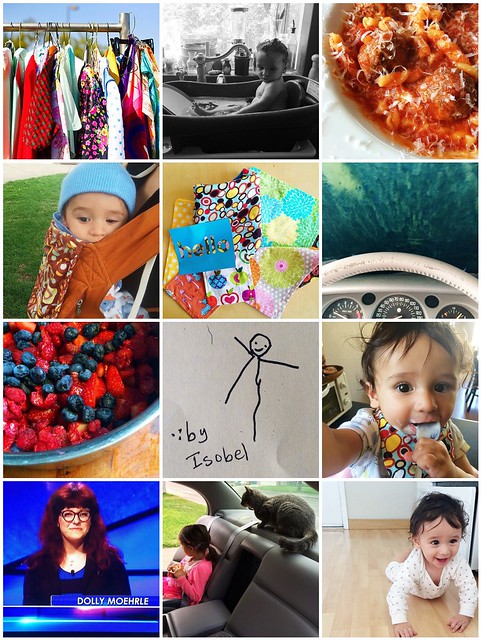